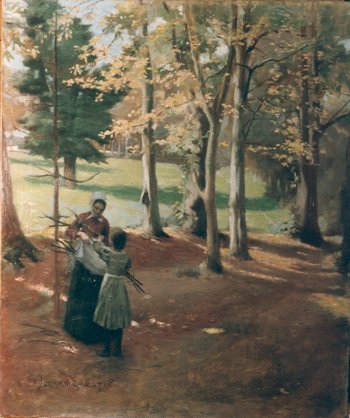 Oil on canvas 30 x 25 inches. Signed by the artist

Note: The artist’s label verso suggests that this work was exhibited in England soon after it was painted. The label is numbered 313.

In the latter decades of the 19th century, the theme of a mother and child engaged in various activities was often used as the focal point of a painting. Aloysius O’Kelly produced one of the finest examples of this type in his Concarneau painting Awaiting the Return.  Another regular subject was the gathering of firewood. In Autumn, Garstin combines both topics and presents them with a stimulating and fresh approach. The painting is a very good example of his ability to avoid the pitfalls of over-sentimentality when presenting poignant subject matter. He appears to manage this by isolating the mother and child from the gaze of the viewer.

The figures are carefully positioned in the left foreground where they set the scale for the tall autumn trees that stretch towards the sky. The narrow path that fades deep into the woodland enhances the perspective. The atmosphere is described with a misty light that appears to drift along the path. With superb colour harmony, radiant streams of sunlight explode through the branches to lift the sobriety of the autumn hues. The entire composition is a lesson in controlled understatement. 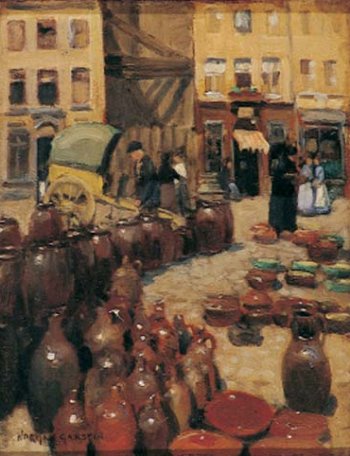 It might cause less confusion if this painting is referred to as Earthen Ware, the original title given to the painting by Garstin, rather than Among the Pots, a larger version now in the Plymouth City Art Gallery. Yet another version is in the Exeter Museum. It is always interesting to compare the differences between paintings that look identical at first glance. By and large, the only constants here are the cobbled square, background buildings and arrangement of pots. All of the figure groups have been changed. This gives an interesting insight into Garstin’s methods. Another point of interest is the horse in the background of the Plymouth painting. He was originally included in our version, just in front of the covered cart, but was painted out. His ghost remains beneath. 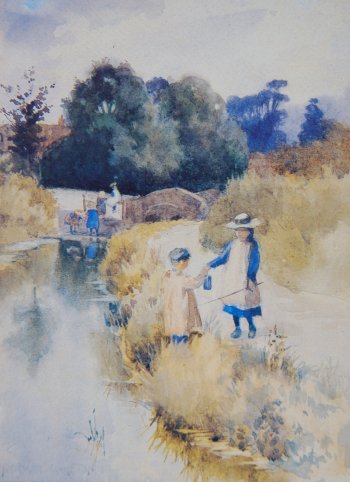 Watercolour on paper, 12 x 9 inches. Signed by the artist

Garstin was always at his best working on a small scale in the open air. This drawing captures a scene played out by generations of young children, lost in their own world at play by a riverbank. The two children in the foreground are probably Althea and Crosbie Garstin. Their ages appear to be right for 1900 or thereabouts. Garstin painted many other studies of his children, one of the best examples being Mary Dolcie Althea, painted in 1898, which  shows the  four year old girl with her head buried in a book. He liked to paint in the countryside surrounding Newlyn and this study was probably painted on the Newlyn or Lamorna rivers, which are straddled by small stone bridges similar to the one shown here. 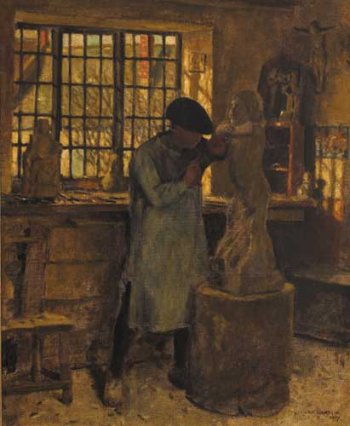 In common with Red Houses, this interior of a sculptor's studio shows Garstin's ability to use light and shadow rather than a complicated palette to create a spellbinding scene. The benches, racks, tools and work in progress offer a wonderful impression of the sculptor's routine while the geometric pattern of the glazing bars and the trees and buildings beyond the window add interest for the eye.

Born in Cahirconlish, Co Limerick, Norman Garstin was the only child of an Irish mother and Anglo-Irish father. His early career was wide and varied. While studying at the Engineering College in Cork, it became apparent that he had a great talent for drawing. To develop this gift, he went to London to study architecture where he met an old friend who told him of the fortunes being made in the diamond fields of South Africa. This led him to Kimberly where he dug for diamonds for four years, sharing a tent with Cecil Rhodes. Had he developed a partnership with Rhodes, his life would have taken a different course; instead, that particular position fell to Alfred Beit and the De Beers diamond company was born. Garstin moved to Capetown and founded the Cape Times with another Limerick man, Frederick York St. Leger, an Anglican clergyman.

After a bad riding accident, in which he lost the sight of his right eye, Garstin made another career change and turned his attention to art. He went to Antwerp in 1878 where he studied under Charles Verlat. He moved to Paris and for three years studied at the atelier of Carolus Duran. He became acquainted with Degas, whom he regarded as a great master, and befriended many of the artists who would later join him in Newlyn.

He settled in Cornwall in 1886 and became one of the founders of the Newlyn School. He was very popular and was looked upon as the intellectual of the group. Money was always tight and he supplemented his income by resurrecting his journalistic skills and writing articles for 'The Studio'. He took private pupils for tuition and organised painting trips to France and Holland. Garstin’s output was relatively small when compared to other painters at Newlyn. The scarcity of his work was not helped by the demolition of his studio in the late 1950s to make was for a public car park in which which many of his paintings were lost. However, the few examples shown here demonstrate the great variety found in his work.